The ‘People of the Water’ Cycle

I began writing a series of novels in 2018 from a story idea I had simmering on the back burners of my mind for about 30 years, and self-published them on Amazon in December, 2021. They’re perhaps best classified as science fiction/romance, but are also a swirl of history, mystery, solitude, romance, the normal, the paranormal, science, science fiction, fantasy, and suspense.

The back cover summary of the first novel, The Water Cure, reads: “Launched in September 1973 to investigate a Saturn 1B instrument ring impossibly winking in and out of orbit, the crew of Apollo capsule Skylark are catapulted through it and re-emerge into dark radio silence without their commander, ‘Mac’ McClanahan. Mission specialist Jen Cloud and flight engineer Stan Lowell plot re-entry in a storm, setting down in a lake well inland, escaping their damaged, sinking capsule. When found by an ancient Cherokee scout, it becomes increasingly obvious they have come home to terra incognita — Earth of the year 1886, near a frontier town called Eureka Springs. Unable to agree on much, they realize that the most innocent of actions could jeopardize the history that is now their future. Their mission becomes survival, doing the one thing they were never trained to do: nothing. To help the years pass, Stan works on ways to return them to their own decade, while Jen investigates why the local water is healing all kinds of illnesses and offering a greatly prolonged life to some, including their Cherokee rescuer George; maybe even themselves. Now, if she can only find out what Stan is hiding ….”

The Crystalline Clarity capsule reads: “Eighteen year-old Nate Walker has only begun his freshman year in college in the fall of 1973 when his parents vanish from the face of the earth. After ten years of following up dead leads, Nate returns to their farmhouse outside of Eureka Springs, Arkansas to decide whether to have them declared dead. He is reunited with his childhood best friends Breanna Mason and Kristin Denton at the funeral of Breanna’s dad. As well as sorting out how he feels toward them both now, Nate must ponder a sealed package from his parents that Breanna finds among her dad’s effects, exactly like one brought to him by a tenant neighbor named George. At first it appears to be a novel manuscript written by Nate’s mother, but evidence begins to mount that it’s an impossible autobiography of his parents’ lives since 1886 on that farm. Hours later, Nate and Kristin encounter a couple who look and sound exactly like his parents — but who clearly don’t recognize him at all. And an investigator from the Navy named Mac seems to be shadowing him night and day ….” 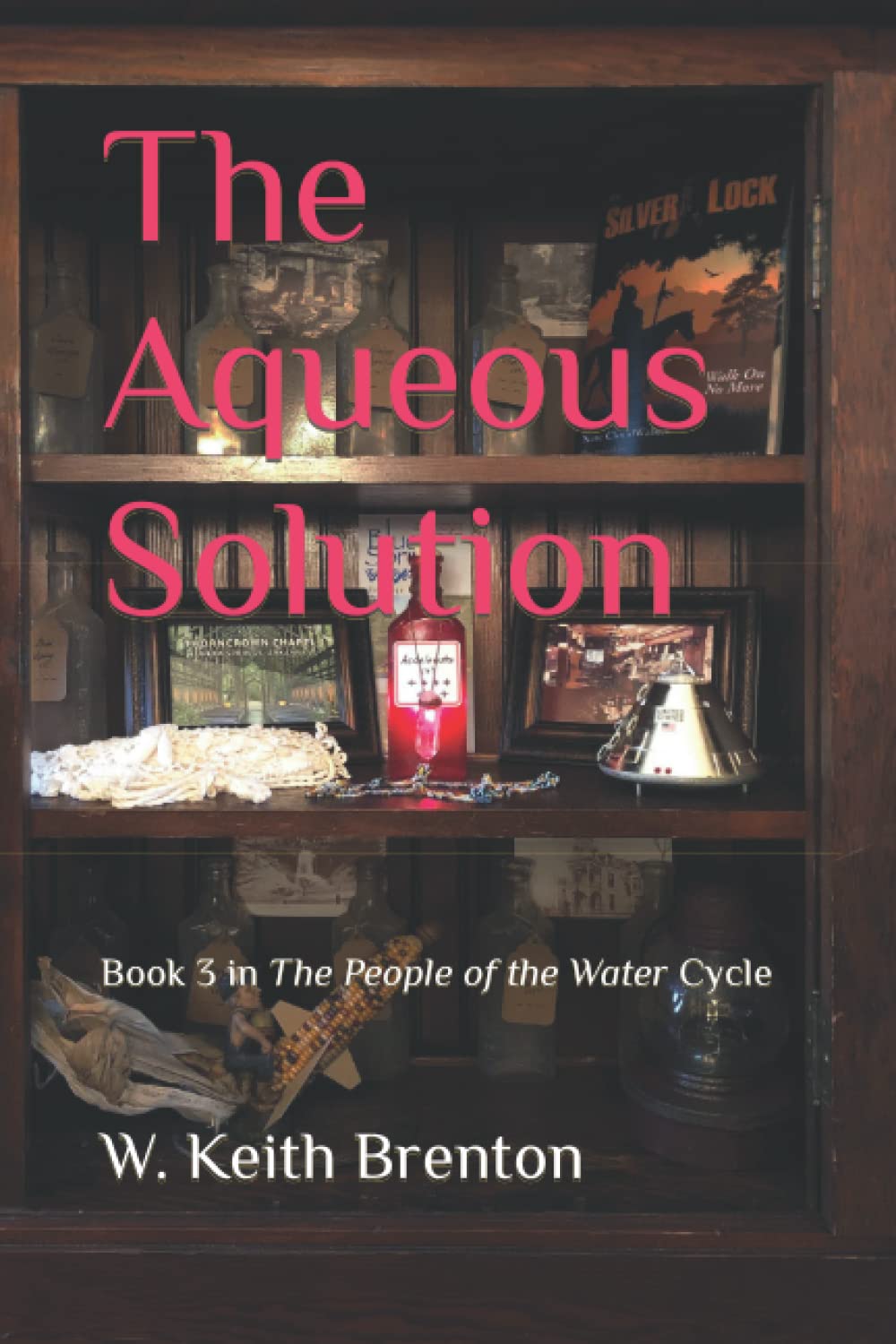 Rounding out the trilogy (at least at this point) is The Aqueous Solution: “For Nate Walker, newly turned 29, life is falling apart. He has lost his job; some people who look and sound just like his missing parents are not them; he has had a falling out with his best friend Breanna; his beloved Kristin has gone missing; his adoptive grandfather George has walked on … and any further answers about who Nate is and needs to be in life have died with him. George has told him how to view the past and how the Waters of the Stars extend life, though those waters seem to be vanishing like everything else Nate treasures. Turning inward, Nate lets his life crash to a halt for many, many years. Then he decides to rebuild it, return home to Eureka Springs, Arkansas and reconcile with his best friend … only to discover a terrible secret about Kristin that Breanna has been hiding from him for decades ….”

All three works are available in paperback, as linked above, or as Kindle editions (free on Kindle Unlimited).

W. Keith Brenton is a retired communication specialist, minister and passenger train conductor, living and writing in the historic resort village Eureka Springs, Arkansas. He is the widowed adoptive dad of Matt and Laura, and Pop-Pop to one grandchild. He enjoys drinking the local water, but unfortunately doesn’t look any younger than his actual age.
View all posts by W. Keith Brenton →
This entry was posted in Fiction Writer and tagged People of the Water. Bookmark the permalink.